In our Language class we had seen topics of racism, segregation and discrimination. After learning some characteristics of them, we were assigned to make presentations about a case on one of the topics. I worked with Juan Lutowicz and we chose to made the presentation about Anna Frank. Here is the Prezi.

Writing – Important Place in your Life

In our Language class we have seen the differences between place and space. After that, our teacher told us to work in pairs and write about a place or space that we share. I worked with Juan Lutowicz and Agustín Segura; and we chose my living-room .

The living-room of my house is the most significant place that I share with Agustín and Juani. I think that the living-room is the best place that the three of us share because of many reasons. There, we had many experiences such as watching all the matches of Argentina during the World Cup and the American Cup, we watched many movies together and we play a lot with the PS3. Also we have had a lot of fun there, that’s why I think it is the best place in coomon that we share.

In our Language class we habe seen “The Gothic Novel” as a genre. After learning all the vocabulary and the main characteristics of this genre our teacher prepare to us an Online Test. Here is mine.

TASK 1: Publish an infographic including the main characteristics of the Gothic Novel as a genre. Name at least two relevant pieces of work and their writers. 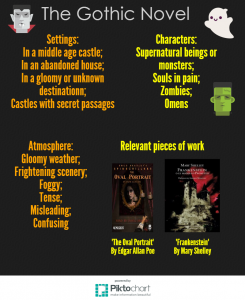 TASK 2: Imagine you had to interview one of the  authors of these stories: The Cask of Amontillado, The Monkey’s Paw and The Yellow Wall Paper. Choose one. Find out about him/her and write the interview. What would you ask them? What would they answer? Publish your interview. (10-14 exchanges)

I had chosen W.W jacobs, the writer of “The Monkey’s Paw”.

I: Hi! Hello! Thank you for being here.

I: Tell me, where were you born?

J: I was born in London, England.

I: Right, you are a great writer William. What generally inspires you?

I: Now, talking about the story “The Monkey’s Paw”, what made you decide to change your common genre, which is comedy?

J: Well, I had got a bit bored of comedy of comedy and I thought that turning to the horror genre was a nice change for the best, so I got involved in what it took to write a proper horror story and I finally came up with my collection of ghost stories “The Lady of the Barge”.

I: That’s indeed a scary collection! There are some horror elements to discuss. Let’s get started by “The Monkey’s Paw” and its origins, India. Why India?

I: Greta! What about its function? That is, changing someone’s fate. Do you believe in fate?

J: Well, that’s a difficult question! I would say I don’t, but having an element which would influence our destiny would be interesting. Don’t you think so?

I: Yeah, but frightening too!

I: And what about the White’s just wishing money?

J: Money runs this world, so I thought it was the perfect wish, although they had to pay a high price for that.

I: What about you? Are you someone worried about money?

J: Not really, I have refused money on several occasions. Thought I remained in my deck position because it was economically stable.

J: Because despite money is not everything to me, it is necessary.

I: If you could, would you like to have an element change your fate?

I: Have you ever been to India?

J: No, I haven’t. But I’ve heard enough stories to get inspiration from.

I: That’s a lot of your time William!

In our Language class we have started reading Gothic Stories. Our first story was “The Monkey’s Paw” written by William Wymark Jacobs. After reading the story we had analysed it. Here is the presentation.

As the second term has started we were assigned by our Language teacher a new book for the Lending Library. This time my book is “Queen’s Pawn” written by Victor Canning. Here is a video that I have made talking about the book.

Our teacher of Language told us to make an online test. In the class we are reading “Face” a book written by Benjamin Zephaniah. THis test is based on him.

Choose a poem by Benjamin Zephaniah and prepare an analysis. Write a paragraph explaining why you have chosen it. Focus on the message of the poem and analyse at least two literary devices present in the poem. Then, find a picture to illustrate the ideas present in the poem and post it on your blog as well. If you are good at drawing you can also make a drawing of the poem yourself. Take a picture of it and upload it too.

I have chosen the poem “Who’s Who” because although it’s short, its message proves how appearences are deceiving most of the times. The message it conveys deals with stereotypes and how mistaken they can be. In the end, despite thinking that poets were boring, he ends up being one of them. Therefore, implying that he is not boring, that he is not like everybody thinks.

The second literary device that I find is alliteration (Repetiton of the same sound). E.g. “Who’s Who and Were women”. 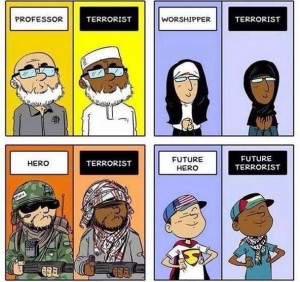 Choose one of the following tasks and write about it.

2. Write an interview  to Benjamin Zephniah as if you were a reporter. Include at least one form of emphasis and highlight it. ( between 10-12 exchanges)

Me: Hello Benjamin! When and where were you born?

Me: Can you tell me on what your poems are influenced?

Benjamin: Well, my poems are very much influenced on the music and the poetry of Jamaica.

Me: What everybody loves about you is the way you write your poems! How do you make your poems so interesting?

Benjamin: What a very good question. In my poems I include feelings that characterise me when I was a kid.

Me: Wow! That’s great. Also being a black poet must have been a challenge for you. How do you manage with that?

Benjamin: Yes! I always try to convince people that the colour of your skin doesn’t matter, whatever do you, including writing poems.

Me: But what idea came to your mind about the blacks?

Benjamin: In my case I lived many years in Handsworth where the suffer of Black people to Black people is very high.

Me: When was your first book published?

Benjamin: My first book was published when I was 22 in London by Page One Books  and its name was “Pen Rhythm”.

Me: Were you the first to record in the group “Wailers”?

Benjamin: Yes, I was the first one to record in that group after the death of Bob Marley. “The Wailers” and me had recorded “Free South Africa”  at Marley’s Tuff Gong Studio in Jamaica.

Me: Did you write any book for children?

Benjamin: Yes. First I didn’t appreciate writing books for children, but then I thought that it was just poetry, not children’s or adult’s poetry. Then I publish the book that was called “Talking Turkeys”.

Me: And what about bullies, drugs, racism, war and being a vegan?

Benjamin: I have written many stories about racism, people that are bullies and drugs, like “Face” in 1999. Because I am a passionate vegan I wrote stories about animals.

Me: The last question. Do you think you change people’s mind with your writings?

Benjamin: Yes, I think that my writings could have changed people’s mind because what I express on them is how reality is.

Me: Thanks for the time! I have learnt many things that I didn’t know before about you. Hope to see you again soon. Bye.

Benjamin: It is great that you have learnt more things about me. It was a good interview. Bye!

This year a new method had been introduced for doing the oral presentation of the Lending LIbrary. We have to record ourselves and talk about the book that we have chosen.

The book that I had chosen is “The Innocent Man” byy John Grisham. Here is the video that I had made. 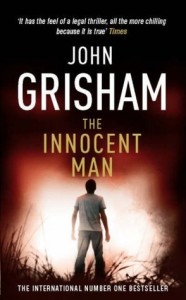 This is an activity that our teacher of Language, Pilar Pando, tell us to make. I work with Juan Lutowicz.

The story begins with the description of the life of the astrologer. In the street he works  is full of other vendors such as medicine sellers,magicians,auctioneers of cheap cloth who conduct their individual trades creating noise all day. The man is not trained to become an astrologer and has little knowledge of the stars but he depends on his wits, his power of observation and his insight into the human mind. It is just practice, and some shrewd guesswork that help him. With experience, he has learned the tricks of the trade. One day, after having finished his daily business, he is about to leave for home when he sees a man close by and hoping to make him a client. The man demands the astrologer tell him something worthwhile about his future.Then he realize he was the one that he try to kill in the past. His name is Guru Nayak and the astrologer tells the client that he had been stabbed and pushed into a well presuming he was dead. Finally, Guru Nayak was satisfied with the answer, gives him some coins and leaves feeling happy at the thought that the man he wanted to kill is already dead. The astrologer comes home and tells his wife that a big load was off his mind that day because he had discovered that the man he thought he had murdered years back in his native village and because of whom he had left home, was in fact alive. He also realizes that Nayak had given him less money than he had promised.

The setting of place of the story is in India, when it said that the coin that Guru Nayak gave to the astrologer is a “rupee“. Also “Jaggery“, that is a traditional non-centrifugal cane sugar consumed in South India. This things said that the story probably is set in India.

In our class of Language we had read “An Astrologer’s Day” and our teacher told us to make a comic in relation to the story. This is mine.